I left Seattle on October 8 for an extended journey in service to humanity’s evolution. My first stop was the San Francisco Bay Area, where I spent two incredible weeks with “sacred subtle activists” connected with the Gaiafield Project and had the opportunity to dip into the Bioneers and Science and Nonduality conferences. On October 16, while meditating on a mountaintop – yes, really… in the Santa Cruz Mountains – I received a spontaneous transmission of spiritual and soul healing and experienced, in an incredibly gentle way, the release of psychological death. 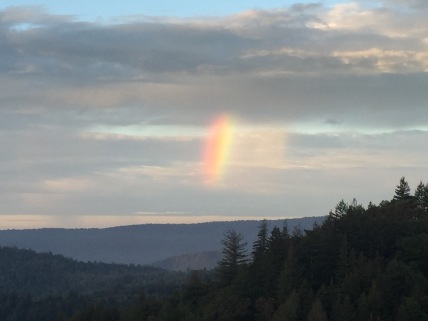 After ten beautiful days of family time and self-care in North Carolina, I continued on to London with a commitment to support transformation for the financial services sector. My business partner in Sourcing the Way, Maria Baeck, lives in Canary Wharf, which is one of the major financial hubs in the world. Our approach to industry transformation includes both exoteric and esoteric aspects: We work with key individuals in the industry who are absolutely committed to life-affirming (r)evolution of that industry, and we work with the transpersonal heart and consciousness of the industry as a higher-order being, or superorganism.

Since my psychological death (and Maria’s as well, for that matter), the potency of our subtle/esoteric work has seemingly jumped off the scale. For brevity and readability’s sake, the depths and details of the consciousness technologies we have developed will be shared elsewhere. Suffice it to say for the moment that in the case of industry transformation, the process begins with realizing oneness with the industry as a whole and with the corporations that predominate. Then, both for and as the inner heart and consciousness of these entities we verify that there is an awakened desire to transform in service to life. (We find that this is almost always the case; and when it’s not the case, it’s not yet right timing for transformation.) Then, both for and as these entities, we make a number of specific commitments to realize transformation for the optimal well-being of ALL.

It is typical that within a few days or weeks (at most) of working in this fashion, we start to see in the media – or hear about through back channels – significant advances, breakthroughs, and/or shifts. Our first few experiments involved Ebola (the next day I read about an experimental vaccine that was 100% effective in treating monkeys), Israel-Palestine (a ceasefire was announced two days later… and obviously there’s still plenty of work to do), Ukraine (a ceasefire was announced the next day, and again there’s plenty of work left to do), and a number of corporations that shall remain nameless, but which seemed to shift in ways that at least we perceived to be positive and life-aligned.

One of my personal favorites is the story of a coaching client who was teaching a seminar to 10,000 employees at one of the world’s largest oil companies. In one of our sessions, we were inspired to connect with the inner heart and consciousness of this multinational corporation in order to support it “in its highest expression, consciously flourishing for the optimal well-being of ALL.” Three days later, our client emailed to say that various computer systems had been acting up in bizarre ways, that everything felt shaky, that she felt a strong need to ground and take salt baths, etc. When we reconnected with the inner heart and consciousness of the corporation, we received that it was trying to get our attention, that it was announcing its transformation, and that all we needed to do was commit to support that, without needing to know how or what form it would take. Soon after we did this, our client reported that everything had settled down in “the field.” However, in the weeks following, the price of oil plummeted, rendering the Tar Sands uneconomical and reshaping the global energy markets…

Of course, all of these anecdotes could simply be coincidences; and we can offer no conventional explanations for how esoteric work “behind the veil of separation” might influence super complex systems that are believed to operate according to the rules of causality and locality. Perhaps one day scientists will discover that the beautiful indeterminacy of super complex systems opens up the possibility of nonlocal and acausal connectivity on a macroscopic scale. In the meantime, we are intrigued by the extremely high correlation of doing subtle work and then being surprised by unexpected shifts. The correlation feels to be about 0.8 for the first year; and we sense that it has been rising since our psychological deaths. And, yes, we would welcome a way to study this scientifically!

A strong intention of this “world tour” is to connect with sacred sites. During two of my previous trips to the United Kingdom, Maria and I visited Avebury, an ancient and subtly vibrant Neolithic destination with stone circles, avenues, and burial mounds. This time we visited Stonehenge with Dr. Jude Currivan, who is on a scientific advisory board for both Stonehenge and Avebury and who has great expertise regarding the archaeology of sacred sites around the world.

In honoring and entering into relationship with the ancient monuments and temples of humanity that remain today – unifying us across epochs of time – we sense that we are being gifted with greater capacities to offer healing to both the human collective and Mother Earth. Our next stop is India, where we will spend a month working with the School of Inspired Leadership and visiting sacred sites along the way.

Meanwhile, the Paris attacks and an outbreak of violence in Africa and Europe have shifted our focus from industry transformation to healing the underlying causes of terrorism, which bombings and retaliatory policies will never accomplish. The very first words that came to me in meditation after the #ParisAttacks were: “This is the swan song of separation.” Then a little bit later I was given the following:

The forces that would separate themselves are fighting with ever more zeal because on some level they’re aware, rightly, that the Apocalypse is approaching. However, the deeper meaning of the Apocalypse is dropping the veil of separation, and in this sense the forces of division are correct: The end is near for the world based on separation. Ironically, many are fighting in the name of Unity and will receive what they’re fighting for, if not in the forms imagined.

As an “intervention,” Maria and I were inspired, individually and then working in circle with another friend, to realize oneness with humanity and then, both for and as humanity, to cultivate “unity and harmony in the one family of Abraham” and to liberate “disunity and disharmony in the one family of Abraham.” Later, in relation to Islamic State I could feel a great force saying, “We will not be trampled on any longer!” This gave me a visceral sense of my brothers and sisters, the sons and daughters of Ishmael, however estranged we may all be in the present world situation of reinforced separation.

Another meditative insight is that the overall context can be likened to a modern-day version of the Mahabharata – a collective (in this case) spiritual initiation conjoined with an utterly tragic and maximally convoluted war on seemingly external battlefields. To the extent that the situation is convoluted beyond what our historical conditioning can handle, we are being forced to resolve the problem from a higher (as in more unified) level of consciousness and awareness. In other words, we are being challenged to evolve our minds, our hearts, and our souls… and the invitation to let go of that which we believe separates us from our neighbors is becoming more and more insistent.

There is much more that could be shared from our meditative inquiries thus far into patterns of violence. An interesting follow-on is what happened the night of my birthday, November 21, when Maria experienced debilitating jaw pain that was apparently linked to global terrorism. It seems that, in showing up with a total commitment to serve the collective healing of this issue, the issue showed up in us (physically for Maria), albeit in a different and thankfully subtler form. By engaging in much the same way that we work with our advanced clients, we were able to resolve the jaw pain; and our sense is that there will also be an overall lessening in the intensity of violence in the coming days and weeks. Meanwhile, we will remain open and continue to address, systematically, whatever symptoms may arise, knowing that the results go far beyond what can be locally or causally explained.

The following night, walking back along the docks from our favorite Indian restaurant, Maria and I were inquiring into a persistent cough that I have had to sometimes greater though mostly lesser degrees for a long time. She heard the words “speaking truth” and had an intuitive sense that I was holding back from speaking what I know, which was certainly the case. To share this openly what is, for us, a nearly continuous flow of the miraculous, beyond “reasonable” explanations, is risky from a conventional perspective. And yet, the part of me that feared taking risks, being deeply seen, and being shunned for speaking truth is what died on October 16. So, on the spot I committed to speak truth, whatever Truth has to say, come what may… Literally that very second a firework launched from the roof of a nearby building. It was not a holiday – Guy Fawkes Night had come and gone – and, truly, that was the only firework we saw or heard all evening.

One thought on “Sacred World Tour”

This site uses Akismet to reduce spam. Learn how your comment data is processed.

ABOUT LETTERS FROM THE ENLIGHTENMENT ZONE

Welcome, friends! Letters from The Enlightenment Zone is a co-creative space for exploring the new consciousness, true nature, and the beauty of life. Contributors are members of the growing Enlightenment Zone team or partners in this work. If something you find on this site resonates for you, please add your comments or contact the author. We love hearing from you!